A Kid’s Guide Through The Solar System: Part 1 – Our Sun

Our sun is so much more than just a ball of light that you can see during the daytime – it is literally the source of all the life around you! By providing energy to plants and trees through photosynthesis, warming our beaches and oceans with its rays, and allowing us to see the wonderful things around us in vivid colors through its reflection, the sun is hands-down the most important part to sustaining the habitable state of our planet. Stars like our sun are magical, heavenly, celestial objects. There are so many stars out there beyond our skies that it is impossible for modern science to even count them all! While our sun is only one of many billions of stars in our galaxy, it is probably the most special one around in the entire universe. Why? Because it is the only star known to science that has a planet with life as abundant as ours, inhabited by diverse organisms such as plants, animals, people, and even liquid freshwater within its orbital system.

The Origins of Our Sun & Solar System

The sun is over 4.6 billion years old (around 4,600,300,000 to be more precise) and is the first, oldest, and centermost object in our solar system. Did you know that the term “solar” comes from the ancient Latin word “Sol” which the Romans used to identify the sun? That’s why it’s called the solar system! In science, whenever we refer to the “solar system” we are speaking about our own star (the sun) and the planets orbiting it specifically (Mercury, Venus, Earth, Mars, Jupiter, Saturn, Uranus, and Neptune). While there are other stars with exoplanets (planets outside of our solar system) in their orbits, we simply refer to these as “star” systems.

How the sun and other stars were formed is a mystery even to modern science, but astronomers have been working tirelessly over the years to figure out well-explained educated guesses of how our sun and solar system came to be.

Perhaps the most accepted theory of how the solar system was born was through a collision of space dust and gas clouds that condensed under immense heat and gravity. This pressure caused an internal explosion within the dusty cloud that would eventually give birth to our sun. The gravity of the sun after forming kept much of the space debris in its orbit, which collided with each other over millions of years, lumping together into larger objects that would become the planets that we know today.

A Closer Look at Our Sun: Mass, Size, Composition, & Surface

Not only is our sun the solar system’s oldest object, it’s also the largest and heaviest by a long shot! With a diameter of around 864,000 miles – even a million Earths put together wouldn’t make up the huge size of our sun! 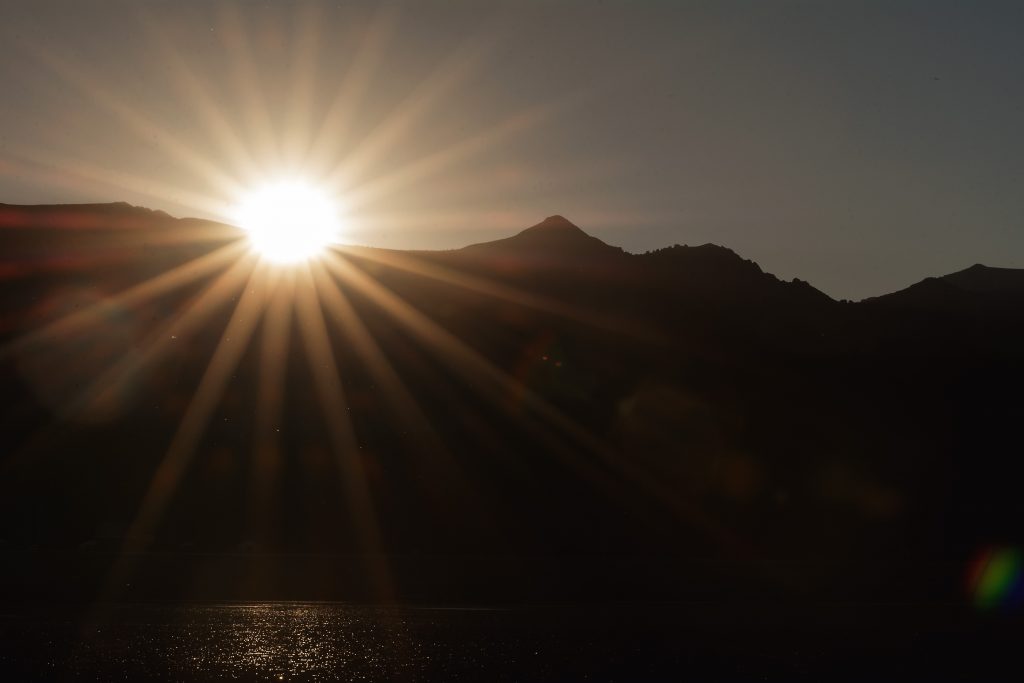 A sphere of hot plasma made up of 99% hydrogen and helium, the sun is about 330,000 times more massive than the Earth and accounts for over 99% of the total mass of our entire solar system! The sun is so massive that Jupiter, the next largest object to it, barely makes up even 1% of our solar system’s mass in comparison.

The sun’s surface (also known as its photosphere) has a temperature of roughly 5778 Kelvin – that’s over 9,900 degrees Fahrenheit! Since the sun formed over 4.6 billion years ago, it has grown in size by about 15% in its radius, increasing the temperature of the photosphere from 5620 Kelvin to the 5778 Kelvin that it has today. The sun is also getting brighter as time goes on. For every 100 million years the overall brightness output of the sun increases by about 1%. That means that the sun we have now is 46% brighter than when it was born!

Does the Sun Move?

You may have heard the common phrase “the sun rises in the east and sets in the west”, which it does as you can see with the naked eye, but it is not actually the sun that moves across our planet’s sky from Japan to California. Rather, it is our Earth that moves around the sun while orbiting on its axis, but did you know that the sun also has its own rotation cycle? It’s true! The sun rotates counterclockwise on its own axis and makes a full rotation every 26 days at its equator and every 35 days at its poles. Our Sun’s Influence on Time & History

Time happens because Earth moves around the sun. We measure our days and nights based on how long the sun is and isn’t visible in the sky and our years based on how many days it takes for Earth to make a full circle around it.

Following the sun’s position in the sky and relying on sundials were the main ways that ancient humans used to tell time before the invention of clocks that we are used to today.

You may know that for many years people thought that Earth was the center of our solar system under a geocentric model. While there were a few scholars over the centuries who theorized that the sun was the real center of our system under a heliocentric model, it wasn’t until 1543 when the Polish astronomer Nicolaus Copernicus published his findings that heliocentrism started becoming the standard for scientific thinking.

While we as humans knew that the sun was a very important object to us regarding life and time from the very beginning, Copernicus’s findings allowed us to see that our wonderful sun is actually even more crucial to our existence than we ever knew before.

Understanding that the sun was the center of our solar system was a big step for mankind as we began to discover more things about not only our magnificent star, but our Earth, the planets, and their motions as well. Astronomical wonders that were left unanswered and seemed unexplainable under a geocentric model finally started making sense to astronomers of the 16th century onwards through the heliocentric design, forever changing how people thought of our world, outer space, and the universe for thousands of years.