Friendship, teamwork, and forgiveness are important: An Interview of Children’s Author Donna Cowan

Friendship, teamwork, and forgiveness are all important – Interview of Children’s Author Donna Cowan 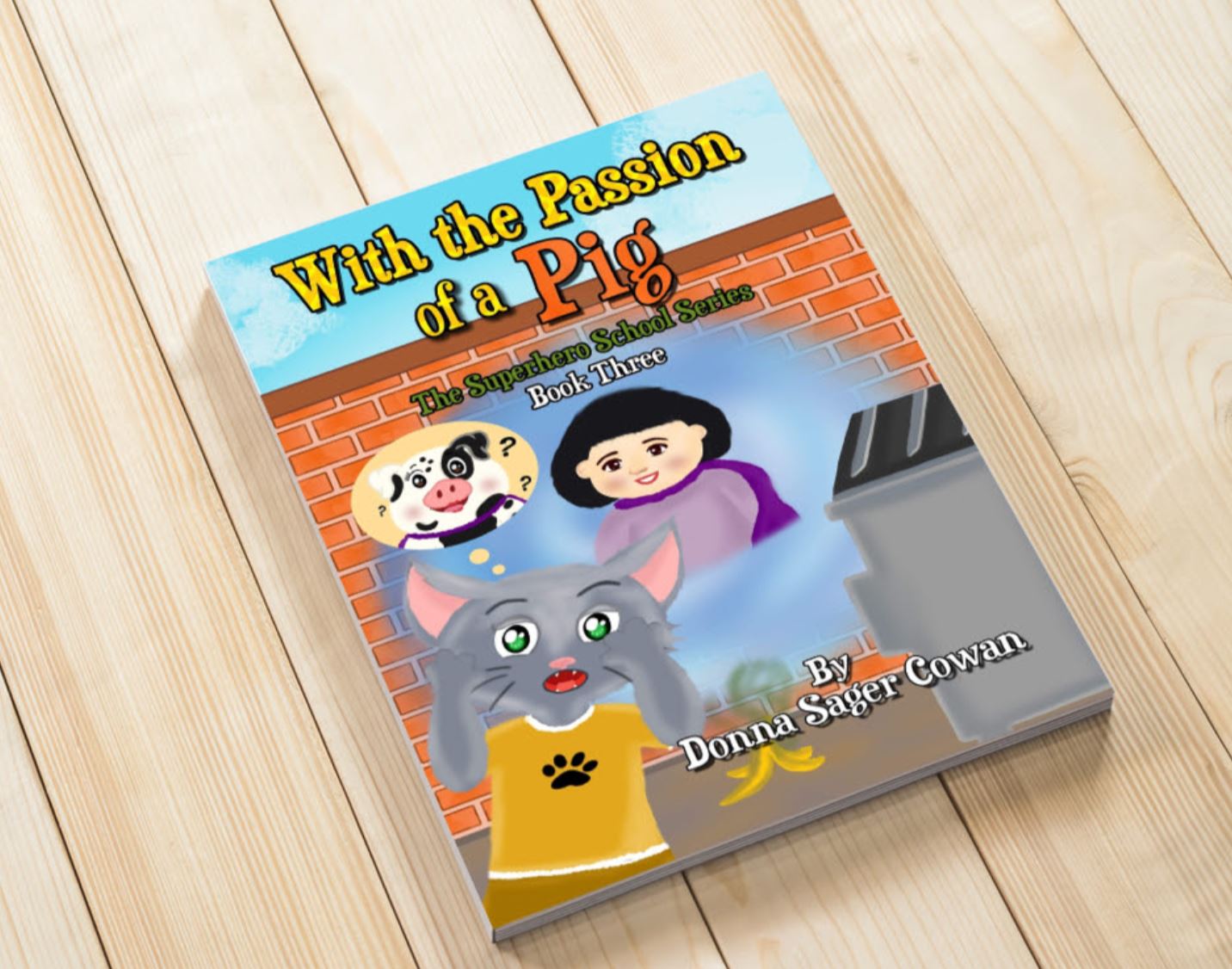 When Patty Porter, tech-savvy pig and team member, tracks Mrs. Gee’s phone to the field where Catt appeared, the team rushes to investigate. They discover a portal linking Sweet Meadows to the human world called California. It’s the same one the monkeys used to transport captured animals.

Patty’s plan? Find Mrs. Gee and the missing animals.. Simple and quick, right? Except the squad is in for a big surprise when they exit the portal on the other side. Join the Superhero School sleuths on another adventure to find Catt’s mom and return home in time for their next class.

Watch the Author Interview of Donna Cowan on YouTube:

What inspired you to write this book?
The Superhero School squad returns for their third adventure: Mrs. Gee is missing and no one knows why. The original inspiration for the series was my granddaughter.

For this book three, I was inspired by great mystery sleuths I read at this age—the Hardy Boys, Nancy Drew, some newer ones, like Spy School and oddly enough, the Treehouse series. They all have a great team of friends working together, discovering and using new skills to solve a mystery while still making it home on time for school the next day. 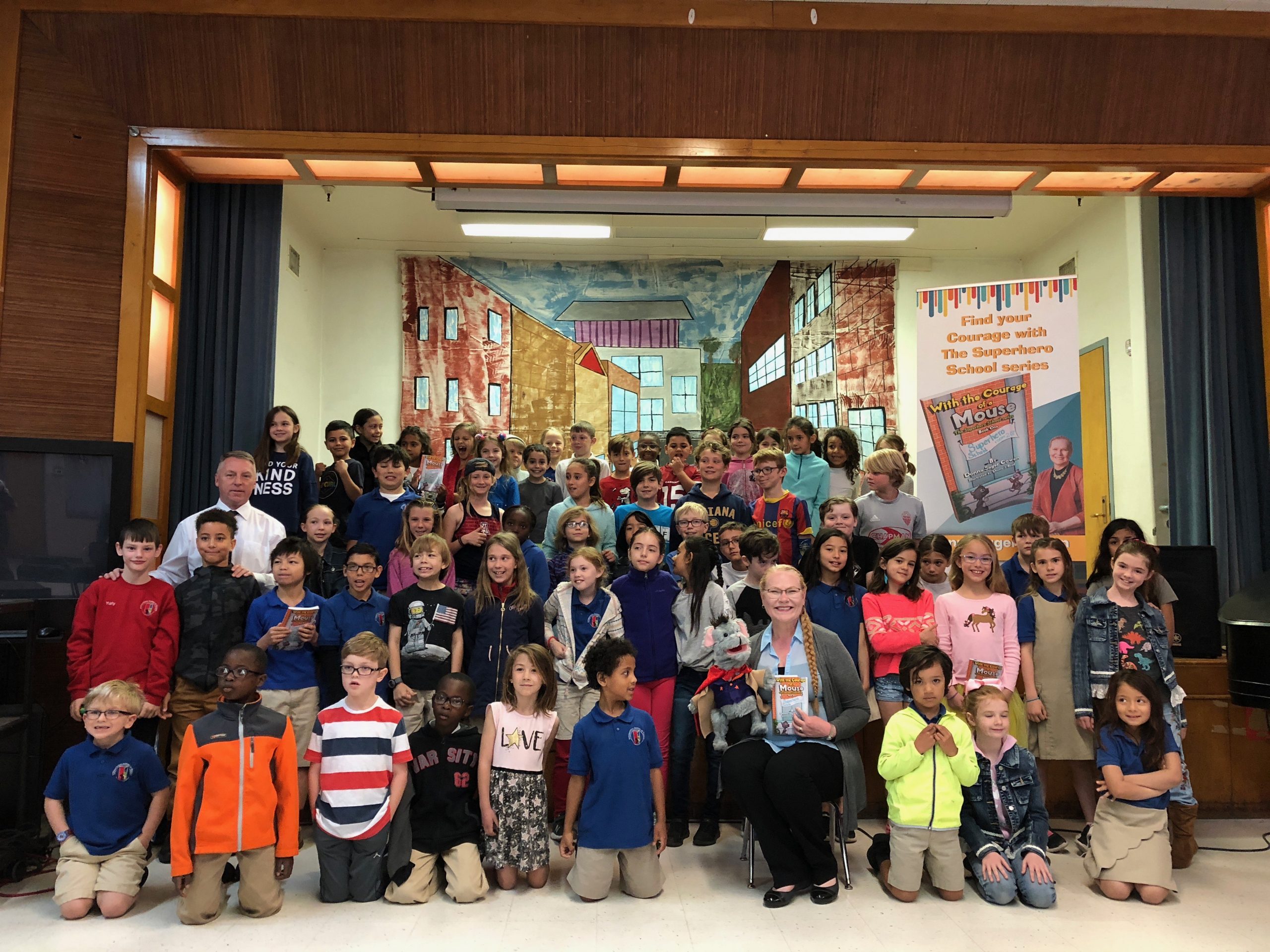 What are 3 things you want children to “take away” from this book?
Friendship, teamwork, and forgiveness are all important. When stressful moments happen, they collide, and not always in a good way. The team discovers secrets they weren’t prepared to know, struggle with one member needing a second chance, and one member unable to communicate. In any given moment, life changes. We continually learn to adapt and give room for our friends to fail, make mistakes, or change for the better. Also, learning to adapt how we communicate.

Friendship, having a connection to those around you is vital; Teamwork, relying on each member to offer their skills and help to the main goal; Forgiveness, interaction with others always leads to misunderstandings, missteps, and mistakes.
Recognizing those and allowing the team to regroup, solve the problem, then move on, is a lesson in life.

No one learns anything from perfection. It is through our failures that we find the most lasting lessons.

What are things that teachers can share with students from your book?
Problem solving
Team building
Forgiveness (others and self)
Everyone has the ability to change
Learning to adapt to new environments, customs, ideals.

How did this book impact you or inspire you or someone who read it?
I love seeing these characters grow and mature, face challenges and learn new skills, while maintaining the essential team values. Remaining friends in face of betrayal and unexpected secrets. This book creates a big change for the group. They have relied on others, and now must continue as the example to their peers. 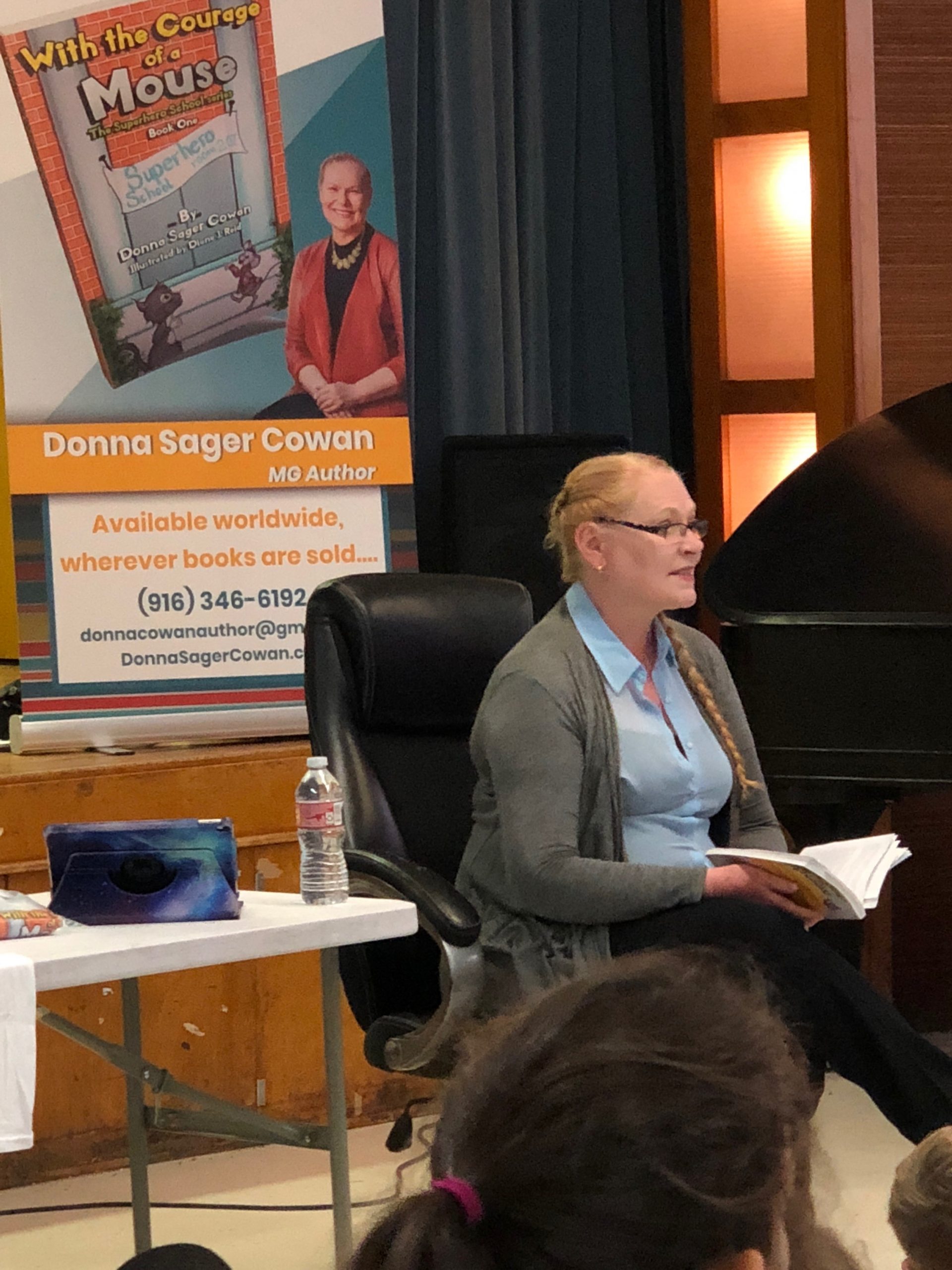 As the youngest child in a large family, Donna often felt invisible, and entertained herself by making up stories or friends to play with. She taught herself to read at an early age, and embraced the world of imagination: filled with Princes, in grand castles, and Fairy Godmothers, in Enchanted Forests.

Today, Donna is a grandmother, random-fact finder, and visionary––encouraging writers of all ages, to share their stories and imaginary friends. As a superhero-in-training, she believes everyone has a “superhero” side, ready to save the day.

She lives in California with her family and five cats, who inspire so many of her super characters. (Sadly, no mice like Simon or Ricky.)

Lisa Caprelli (00:03): I’m so excited to interview children’s author, Donna Cowan. She’s the creator –  the third in the series With The Passion Of A Pig. Let’s bring her on. Hi, Donna, welcome!

Donna Cowan (00:13): Well, thank you for having me. I’m so excited to be here today to talk about my third book in the Superhero School Series: With the Passion Of A Pig.  This has been an exciting adventure for me, and I always love getting to come and talk to you, especially! 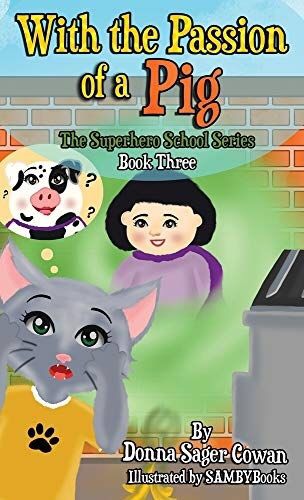 Lisa Caprelli (00:27): It’s so much fun seeing your books and all the outreach you have.

Donna Cowan (00:33): Well, this book starts out with one of the members of the Superhero School Squad. Patty Porter– she is a tech savvy pig and when one of their town patriarchs goes missing, she uses all of her skills to track down her cell phone, to a field outside of Sweet Meadows, where they live. When they arrive in this field, they discover a portal that takes them to another world called “California,” where Catt is originally from. And so they decide they are going to be superheroes. They go through the portal, looking for the town matriarch and some missing animals from the previous book. And they have an unusual adventure because when they come out on the other side, they’re no longer animals. They are children!

Lisa Caprelli (01:22): Donna, what inspired you to write this book?

Donna Cowan (01:25): Well, this particular book again is part of the series that I laid out of eight books. Originally, the story and the series were inspired by my one granddaughter when she was pretty young — and she was asking me what it was that I thought my cats did at night — when they were gone all night.  And I really didn’t have an answer for her. But at that time, I was telling them stories at bedtime and making up stories. And so after a few weeks, I made up this story about, you know, my cat going out to save her animal friends at night. And so she was a superhero and they loved it. They really wanted me to tell this story over and over again. And so I started writing it out so that they would have it. And quickly realized that we had to go back to the beginning of how she became a superhero. And so the superhero school series was born.

Your books are for the ages 7 to 12, which is such an important age. Why do you like identifying the children in this age group?

Donna Cowan  (02:19): Primarily, it started when I began publishing books. I’ve been writing for forever — it seems like — but when I decided to start publishing children’s books, this was the age range that my grandkids were in. So it was a lot of the books that we were reading. And I thought, you know, this is a great age because they’re past learning the primary function of reading. And they’re actually into the stories  — they’re a little bit longer. And they have some, you know, ideas where I feel like as an author, you know, it’s my job to raise questions and ideas for them to then have that conversation with, you know, a parent or friend.

Lisa Caprelli (02:59): Donna, what are three things that you want people to take away from this particular book?

Donna Cowan (03:03): In the third book, With a Passion Of A Pig, I think one of the big themes are friendship and teamwork, specifically teamwork, because the characters — the squad — could not get through this big challenge in their life without working together. There are many new pitfalls that they find work in the real world that are not part of Sweet Meadows. And so they do have to work together. They do have to bring information back to each other. There’s also this FRIENDSHIP — that they could very easily go off on their own paths and are tempted by that. But ultimately they decide that, you know, their friendship and staying together is very important. But then I think the third one is, again, this theme of FORGIVENESS throughout this third book. They have many secrets revealed to them that they were not aware of and they were not quite prepared for, but they have to forgive each other — and those around them for maybe things that they didn’t know, and maybe they had a good reason for not sharing it with them. So it’s a little bit with a theme running through about finding that forgiveness, right?

Lisa Caprelli (04:15): We want to be PASSIONATE about almost everything we do that drives us. Why did you choose that word for this book?

Donna Cowan (04:22):  It’s actually an accident. Patty Porter was eating her favorite pickles and crackers, and she was mumbling “PASS IT ON” — And they thought she said PASSION. But the reason I chose it for the title is because this depicts — this particular character, Patty The Pig, she’s very passionate about what she does. She’s very passionate about keeping the team safe and on track and on mission. She’s very passionate about making sure that they’re protected and that they have all the information that she can provide. So again, it is about the specific character that we’re talking about in each of the books. In the first book, it’s with the courage of a mouse, which describes one of the main characters, Simon Cheddar … is with the curiosity of a cat, which very much describes Catt the Cat. He was very curious about everything in this new world. So we do try to find not only a word that gives us a sense of the story, but also gives us a sense of the individual character.

Lisa Caprelli (05:27): Why do you think it’s important to teach children this?

Lisa Caprelli (05:53): Anything else that you’d want to share about your books or about you?

Donna Cowan (05:58): Well, just a few updates, you know. You can go to DonnaSagerCowan.com and check all the links to the books and all the information about the books are available in all versions and they are available worldwide. If you would like to go to your local bookstore and just ask for it, if they don’t have it in stock, they can get it for you. And just a couple of little ideas coming up this year. We’re trying to do a new spinoff series with one of the minor characters, Ricky Rent — he’s getting his own series. We’re  going to cap him off this year with Crowning the King, first in the Ricky Rent Street Rat series. And so that one should be pretty fun. And then of course the fourth book in this series, we’re hoping to get that out before the end of the year. And that’s going to be WITH THE HEART OF THE HERO. And that will be Freddy’s story.

Lisa Caprelli (06:45): Oh my gosh! So much fun. I’m so excited to keep following your great work in the world. Thank you, Donna for all that you do to bring literacy, joy, imagination to children and adults. 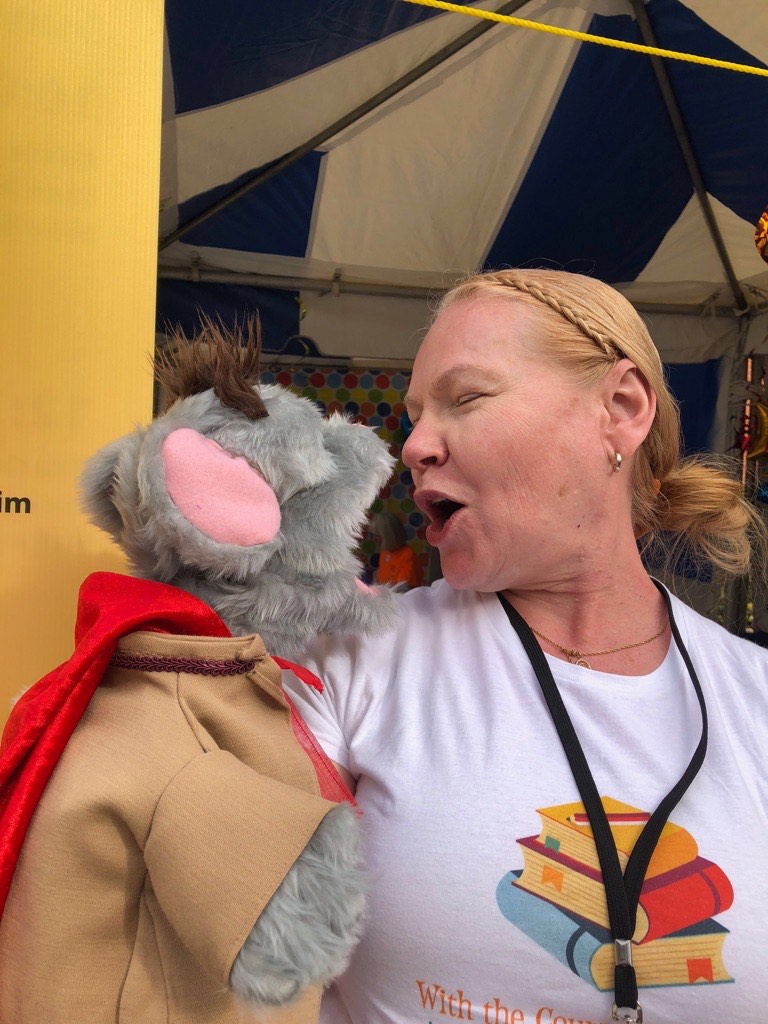