Research shows that one of the most important reasons for the increasing interest in audiobooks for young people is the correlation between listening to audiobooks and improvements in reading comprehension, fluency, language acquisition, vocabulary development and improved achievement. 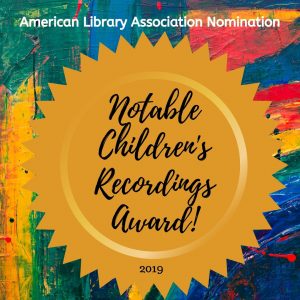 Behind the scenes for the making of the first Unicorn Jazz book and kids audible book in this children’s unicorn book series was serendipitous. Creating and finding the perfect voice for this children’s book was a process!

First, my fiance, Chris, went through 70 voices until the voices and talent of Tiffany Marz shined through a short 30 second or so recording.  I did not have the time to listen to all the auditions, so him, being an avid audiobook lover said, “I would love to take on this project because it is important!”

We had the page of Woof the Crow for the audition to be read. It was quite entertaining to hear other people’s takes on Woof the Crow’s voice.  Many were good, however, one in particular captured the essence of Unicorn Jazz and her cast of characters. He had me listen to it, and I smiled ear to ear.  I called her up and explaining the importance of what this book and its subsequent books would mean because I wanted her to put as much passion into creating it as we have for its long term visions.

THE JOURNEY BEHIND THE MAKING OF THE SONG

What would a children’s book be without a song?  After writing Unicorn Jazz’s first book, I called around to find a professional singer/songwriter who could help me turn the verse I wrote in the story into a fully developed song.

I went through a few singers who did not get it, or who did not have the same passion for the vision I had for the children.  And then I contacted Thanecha Anderson.  She read the story, immediately called me and said, “Yes, I will do it.  I think it’s a lovely story; thank you for thinking of me.”

It was so much fun singing the Unicorn Jazz Friendship Song over and over to make this kids audible book for the children’s unicorn book series, with Thanecha getting the guitar music just right.  I could tell that everyone saw the importance of what we were creating based on the messages in the book. It was really surreal that this was all happening.

The process by now was taking three months and I was anxious to get it out to children and parents to sing along.  By April we got it produced and recorded in a professional studio by William Parrish.

The final best recorded Unicorn Jazz Friendship Song will be made available later on Itunes and Spotify. 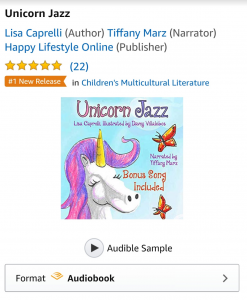 Video about the audiobook on Audible:

Above: Kerri Kasem and Lisa Caprelli reading and singing the Friendship Song at Children’s Hospital of Orange County, April 2019

Source for kids audible book research: (“Not Just for Listening,” Book Links, May 2005)