Unicorn Jazz is a tale about belonging, being unique and the power of believing in others. The story follows Jazz, a young ivory unicorn with purple hair, a golden horn, and a musical note for a tail. Jazz loves to sing and hopes to one day become as talented as her mother.

Unicorn Jazz’s unicorn picture book is a #1 best selling fairy tale.  Unicorn Jazz’s story begins when she and her parents move to a land far away from her first home. In this new and unfamiliar place, Jazz would soon find herself having to make friends with the other animals at school. Nervous yet hopeful, Jazz sang to herself on the way to her first day where she would do her best to make new friends as a newcomer. However, Jazz’s expectations took a left turn when she couldn’t fit in with the rest of the animals after joining in on their favorite activities. Jazz didn’t blend in with the giraffes because she couldn’t eat off the high trees as they could, while the chameleons found her to be no fun in hide-and-seek because her bright colors were too easy to spot. It also didn’t help that Jazz was the only unicorn in a school full of numerous different animals, including birds, horses, elephants, lions, and turtles, who all tended to hang out together in their own herds. 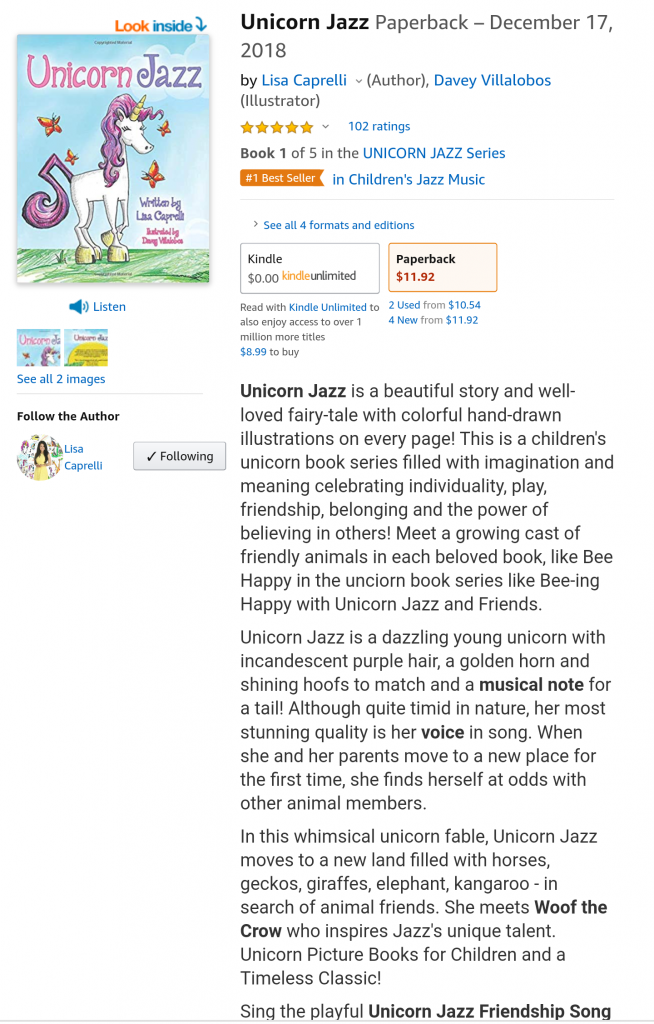 No matter what mood she’s in or how she feels, Jazz would always turn to singing to make her happy moments more joyful and even to cheer herself up whenever she feels down. Although Jazz has quite a lovely voice herself, she’s too shy to sing in public, so she only sings when she’s by herself with no one around to hear.

When her first day of school was over, Jazz went home and told her mother about how difficult it was making friends at school because she’s just too different from all the other animals. Her mother sang Jazz her favorite song and reminded her that she’s not different in a bad way, she just possesses qualities that naturally make her stand out, like her beautiful voice and shiny hair. Still feeling discouraged, Jazz took a walk by herself and, as she usually does when she’s alone, began singing along the way to get her spirits back up for school the next day.

In comes Woof the Crow, an unassuming bird with a funny name and a raspy voice, who heard Jazz singing as he was flying above. After hearing her voice, Woof had to land and tell Jazz just how amazing she sounds and how he never heard a voice as beautiful as hers nor seen a coat of hair nearly as bright and colorful. Jazz was shocked since no one ever complimented her on any of those things except her mother. Heart-warmed at Woof’s statements, Jazz began to feel a lot better the longer she talked to her new crow friend, who memorized her song after hearing it only once and began reciting it. After having a good laugh at Woof’s less than fantastic singing, Jazz felt ready to take on another day at school by making friends in a different way.

Instead of trying to fit in by doing what all the other animals liked, Jazz decided to show everyone the activity that she enjoys the most. With her head up high and smiling ear to ear, Jazz entered school the next morning singing as she walked down the hall. Jazz’s singing immediately grabbed the attention of all the other animals who began to praise her voice, including those who told her that she couldn’t play with them the day before. This was a changing point for Jazz as she realized that even though she can’t fully participate in the activities that the other animal groups like, all the animals at school loved her singing and began recognizing her for her own unique ability. The book ends with all the animals at school singing along to Jazz’s favorite tune in unison.

Social-emotional learning and self-confidence are positive psychological elements that children can take away in this entertaining audiobook. At the beginning of the story, Jazz starts off rather upset because she didn’t have any similarities to anyone she met at school. Towards the end of the story Jazz found out that the best way to make friends wasn’t to be like everyone else; the best way to make people like you is by being your true self wherever you go.

The Unicorn Jazz audiobook revolves around the technical aspects that go into making a great audiobook for children. As per the ALA, ALSC and YALSA guidelines, Unicorn Jazz falls into the highest category of voice quality, speech timing, and soothing sounds for child audiences to follow along. As such, this audiobook becomes both engaging and stimulating enough to easily captivate and hold the interests of children listeners throughout the story. The narrator adheres to consistent character vocalisms and abides by non-condescending tones in her speech during dialogue, even when Jazz gets a little discouraged by the other animals who didn’t want to play with her. Rather than using critical tones when speaking as the horses, giraffes, and geckos, the dialogue throughout the audiobook is well suited for children as the voices fall more toward the somewhat boastful and amusing side in their respective dialects.

In a way, certain journeys found in Homer’s Odyssey, the epic Greek poem which the award is named after, are represented within the story of Unicorn Jazz itself. The distinct difference between the two is that the former follows the hardships Odysseus faces in leaving foreign places to return to his homeland and family, while in the latter Jazz must learn how to create a home for herself among strangers in a foreign place. However, both are tales that concern human development in their own rights through the use of physical and psychological adventure. In Homer’s Odyssey, Odysseus’s physical adventure begins with him having to travel a far distance in order to get back home to his wife and son after the Trojan War. Psychologically, he faced several dangerous trials along the way, many of which he used his wit to overcome. In Unicorn Jazz, Jazz’s situation is a permanent change in location where she must learn to adapt socially with the other animals upon moving away from her initial home. Like Odysseus, Jazz begins the story with a physical adventure herself by moving somewhere far away, and, like Odysseus, she also uses her wit and psychological strength to achieve her goal at the end of the story.

On another note, both Unicorn Jazz and Homer’s Odyssey have guardian angels incorporated into the plot as well, an outside force which neither Jazz nor Odysseus could have succeeded without. Throughout the Odyssey, Odysseus and Telemachus had Athena, a goddess from above, aid them in their journeys and ultimate reunion. A similar figure can also be seen in Unicorn Jazz in Woof the Crow, who came to Jazz from above and offered golden words of wisdom in her time of need – words which gave her the confidence to do what she did the very next day. With the help of Crow, her first of many new friends, Jazz overcame her fear of public singing and by doing so brought all the animals at school together through her unique talent.

The Odyssey became one of the greatest oral stories throughout the centuries because of how its messages spoke to others who heard its tale and decided that this was a story worth holding onto. This is largely due to the Odyssey’s long standing relevance concerning human emotion and ambition; it touches on the difficulties that people have felt all throughout the ages and still feel to this day, such as fulfilling the desire to find a home of their own and escaping the darkness of their past and present. The Unicorn Jazz audiobook should be a candidate for the Odyssey Award because it embellishes these same inherent values regarding the emotional aspects of children’s lives when making new friends in new places. Not only is the audiobook captivating and engaging due to its amazing sound, its story is also highly relevant for many child listeners who could relate to Jazz and in turn, feel that they are understood as well.

The expression of intellectual freedom is highly explored in Unicorn Jazz and is one of the key positive elements that kids can take with them after listening to its warmly empowering message. You can easily imagine the author’s intention of a well-crafted children’s book come to life if you were to close your eyes and listen solely to the sound of the Unicorn Jazz audiobook. The producer went through over 100 auditions to find the perfect match for this children’s book about a shy unicorn who moves to a new land in search of animal friends, including horses, lizards, and geckos.  The narrator is a voice-over artist using different voices, music and sound effects that are woven together into this beautifully articulated production. It creates a seamless transition to the picture book, Unicorn Jazz, also illustrated by hand drawings. The book has been so well received that it’ll also be turned into an Amazon Prime videobook production. Additionally, there is a bonus “Unicorn Jazz Friendship Song” sung by Kerri Kasem (Casey Kasem’s daughter) that the author inserted into this audiobook on Audible as a bonus, thereby further honing in on the oral tradition aspect of the Odyssey Award’s theme. Lyrics to the song are contained throughout the book as the author felt it was important to include a song for children, parents, and educators to correlate with.